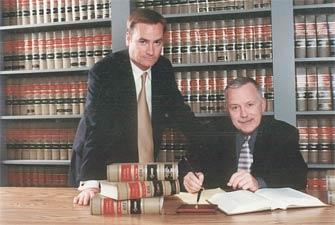 There is a simple reason that Kevin M. Kelly and Sean P. Sullivan are Members of America's Top DUI & DWI Defense AttorneysTM:

Because within as little as 10 days of your arrest you may automatically lose your drivers license and even your entire case by delaying your decision to hire an attorney, we strongly recommend that you complete a FREE DUI CASE REVIEW immediately.

United States Court of Appeals for the Ninth Circuit, 1981

"Curfew on the Strip: Do Teenagers Have Rights?"

Member, Board of Directors, The Problem Gambling Center, 2001-present

Member, Board of Directors, National Conference of Community Justice, 2000-2003

Member, Board of Governors of the State Bar of Nevada, Committee on Moral Character and Fitness, 1998 - present

Chair, Nevada Supreme Court of Nevada Task Force for the Study of Racial and Economic Bias in the Justice System 1993 - 1997

Member, Board of Directors, Nevada Attorneys for Criminal Justice 1989 - 1994

and the Criminal Law

Administrative Office of the U.S. Courts

Under the Microscope: Beating DUI's with Science

FOR ALL OTHER AREAS OF NEVADA

PLEASE FILL OUT A FREE DUI CASE REVIEW TO REACH AN ATTORNEY!!!

Quickly obtaining a DUI attorney, a DWI attorney, or a Drunk Driving attorney to review your case is extremely important! Please complete a FREE CASE REVIEW and submit it as soon as possible, and we will have an attorney in your area contact you immediately.

Because within as little as 10 days of your arrest you may automatically lose your drivers license and even your entire case by delaying your decision to hire an attorney, we strongly recommend that you complete a FREE CASE REVIEW immediately.

If you are a qualified attorney who is interested in applying to become a member of America's DUI & DWI Defense Attorneys" PLEASE CLICK HERE for more information, or contact Donald J. Ramsell at 630-665-8780 for further information.

Visit the other Members of America's DUI & DWI Defense Attorneys" :

The DUI attorneys and DWI lawyers listed on this site include nationally published authors on DUI laws and DWI laws. These Drunk Driving Defense Attorneys have appeared in over 75 local television stations and 229 newspapers nationwide.

Understanding DUI Scientific Evidence
This product provides an insider's perspective on the evolving technologies and procedures associated with the evidence associated with driving under the influence (DUI) charges. Leading defense attorneys guide the reader through the key stages and steps involved in successfully defending a client accused of driving while under the influence.